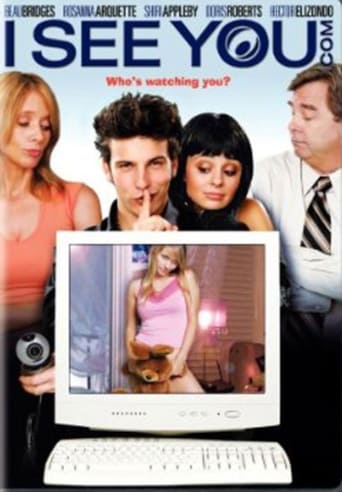 - +
Rate this film
Add a review
Delete Rating/Review Share Add to queue
In your queue
Remove it
I-See-You.Com 2006

Tyler Perry 7 years ago
I-See-You.Com (2006) is a comedy film directed and co-written by Eric Steven Stahl, starring Beau Bridges and Rosanna Arquette. Harvey Bellinger (Beau Bridges), his wife Lydia (Rosanna Arquette), and their two teenage kids live a well off life in suburbia. This changes, however, when their seventeen year old son puts video cameras around their house, and starts to broadcast the family's actions live on the internet. When Harvey finds about this, he is angry and appaled. But when he realizes that money can be made with the internet broadcasts, the Bellingers start acting crazier, eventually leading to Harvey blowing up the house to get rid of the cameras.
Read more on