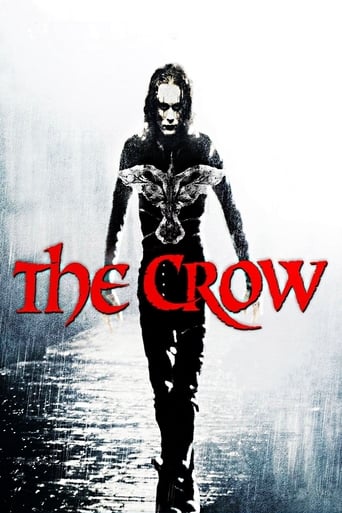 Grace over 3 years ago
Strong characters, acting, and even a solid view of justice. Surprisingly visceral.

Noah Rymer 4 years ago
did not age well, but still fun.

Fae over 6 years ago
Dark, filled with revenge; I've watched this movie many of times and loved it each time.

Andy Whitfield over 7 years ago
Brandon Lee makes this a compelling watch. Once of my favorites to rewatch.

Daniel Jones over 7 years ago
One of the better comic book adaptations out there. Dark and brooding. Lee is great.

Michael Cole over 7 years ago
Probably the best revenge flic ever made, that showed Brandon Lee's talent as an actor.

Jessika Acklin over 7 years ago
i wish he was still alive :(

Denise Fleming over 7 years ago
A dark, gothic film that's as brutal as it is stunning.

David McKinstry over 7 years ago
Well done, not sure what else to say

Mike Miller over 1 year ago
The Crow is a 1994 American action film based on the 1989 comic book of the same name by James O'Barr. The film was written by David J. Schow and John Shirley, and directed by Alex Proyas. The Crow stars Brandon Lee, in his final film, as Eric Draven, a rock musician who is revived from the dead to avenge his own murder, as well as that of his fiancée. While filming during the last weeks of production, Lee was mortally wounded when a dummy bullet, which had become lodged in one of the prop guns, was shot into his abdomen by a blank cartridge. The film was a critical and commercial success after its release, opening at the top of the box office. On October 30, Devil's Night in Detroit, Sergeant Albrecht (Ernie Hudson) is at the scene of a crime, where Shelly Webster (Sofia Shinas) has been beaten and raped, and her fiancé, guitarist Eric Draven (Brandon Lee), has been stabbed, shot and thrown out of the window. The couple were to be married the next day, on Halloween. As he leaves for...
Read more on