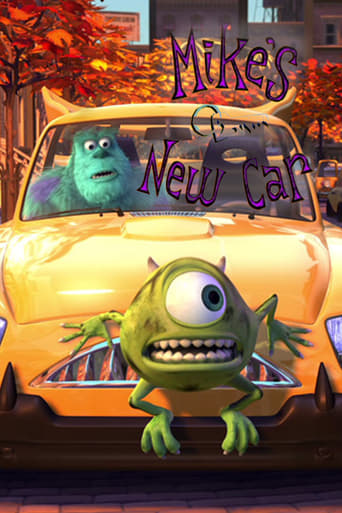 Dylan Clites over 7 years ago
Funny enough short based on one of Pixar's strongest films. Not as funny as the movie.

Davide MrBlonde over 2 years ago

Félegyházi Dávid over 5 years ago

Diana Riashko over 5 years ago

Stubberud over 5 years ago

gio over 5 years ago

Becky over 6 years ago

Siona Cameron over 6 years ago

Adam Trucker over 6 years ago

Becca Brooks almost 7 years ago
Mike's New Car is a 2002 Pixar animated short, starring the two main characters from Monsters, Inc., Mike and Sulley. Directed by Pete Docter and Roger Gould, it is the first Pixar short to utilize dialogue and the first to take characters and situations from a previously established work. It received an Academy Award nomination (Best Animated Short Film in 2002) and was included in the 2002 DVD release of Monsters Inc. The DVD release features commentary by "Docter and Gould", which turn out to be the directors' young children. Mike is obsessed with his new six-wheel drive car, and insists on showing it off to his pal Sulley. Unfortunately for Mike, everything that can go wrong does go wrong. Sulley plays with the ultra-adjustable seats until an annoyed Mike asks him to stop. Mike starts the engine and the seatbelt reminder tone sounds. He finds his seatbelt stuck and accidentally locks himself out of the car while trying to unstick it. Sulley, trying to be helpful but confused by...
Read more on