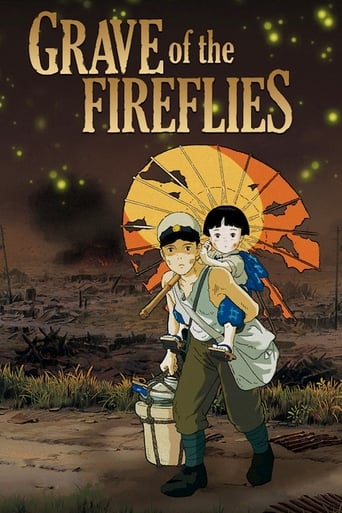 Michael Cole 1 year ago
Who's ready to cry

Heather Blacklock over 1 year ago
.

Jennifer Pease over 2 years ago
EVERYONE should watch this once. That's all you need though. Be prepared for heartache

Noah Rymer almost 5 years ago
even as a fan of animation I didn't know a cartoon could make me feel this much.

Davis Keck 5 years ago
Well now I just want to hold my son and cry.

Dónal Kennedy 5 years ago
As visceral and haunting a portrait of the war at home as you'll find.

lewwatt almost 6 years ago
Severe and sincere all the same; it brings home in digestible form, the terror of war.

Griselda Luna 6 years ago
indeed, the story is so sad and depressing, but it's so beautiful and outstanding.

Ryan Boucher 6 years ago
Fuck. That was depressing.

William Fenton over 6 years ago
An animated blow in the stomach, melancholy writ huge. You will cry.

Kittypuff almost 7 years ago
This movie was a real tug on the heartstrings! Beautiful and melancholy

Asif F. 7 years ago
the only cartoon that has ever made a grown man (me) cry.

Zach Sly 7 years ago
The saddest film I've seen. I never questioned the necessity of the atom bomb until this.

Alex 7 years ago
Love this movie. Rarely will a movie bring audiences to tears. This movie won't disappoint

Tim King over 7 years ago
Amazing and a must watch but too depressing for me to watch a second time.

Swapnil Nandeshwar over 7 years ago
Never thought would cry after watching a animated movie.....never a movie soo good...

Meryovi over 7 years ago
Sad but great movie. Almost all my friends cried.
Grave of the Fireflies (火垂るの墓, Hotaru no Haka) is a 1988 Japanese animated war tragedy film written and directed by Isao Takahata. This is the first film produced by Shinchosha, who hired Studio Ghibli to do the animation production work. It is an adaptation of the semi-autobiographical novel of the same name by Akiyuki Nosaka, intended as a personal apology to the author's own sister. Roger Ebert considers it to be one of the most powerful war movies ever made. Taking place toward the end of World War II in Japan, Grave of the Fireflies is the tale of the relationship between two orphaned children, 14-year-old Seita (清太) and his young 4-year-old sister Setsuko (節子). The movie begins in Sannomiya Station and portrays Seita, in rags and dying of starvation. A janitor comes and digs through his possessions, and finds a candy tin containing ashes and bones. He throws it out, and from it springs the spirit of Setsuko, Seita, and a cloud of fireflies. The spirit of Seita continues to...
Read more on