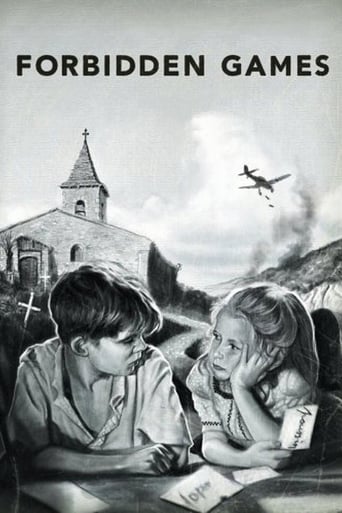 Jeff Clay over 4 years ago
Powerful and evocative

Austin over 5 years ago
Though the whole thing feels slightly contrived, incredible imagery makes it memorable.

Sina Bakhshandeh over 4 years ago

Myrto Sampa over 7 years ago
Forbidden Games (French: Jeux interdits), is a 1952 French-language film directed by René Clément and based on François Boyer's novel, Jeux interdits. While not initially successful in France, the film was a hit elsewhere. It won the Golden Lion at the Venice Film Festival, and is still one of the most popular French films in the US. The Criterion Collection released the film on DVD in 2005. The film had 4,910,835 theater admissions in France. The film recounts the death of five-year-old Paulette's (Brigitte Fossey) parents and of her pet dog in a Nazi air attack on a column of refugees fleeing Paris, France during World War II. In the chaos, the traumatized child meets ten-year-old Michel Dollé (Georges Poujouly) whose peasant family take her in. She quickly becomes attached to Michel and the two attempt to cope with the death and destruction that surrounds them by secretly building a small cemetery where they bury her dog and then start to bury other animals, stealing crosses from...
Read more on