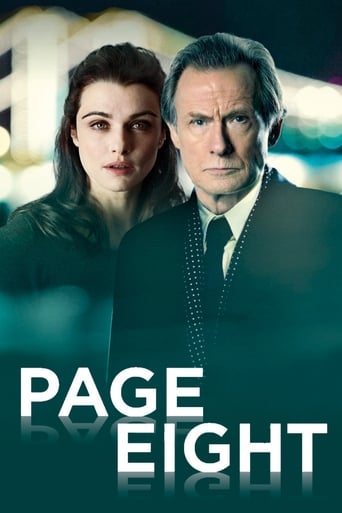 Peter Renshaw almost 6 years ago
'Because that's the job. Deciding who to trust. That's what the job is.'

Ben Askins 7 years ago
Bloody good spy thriller. I have such a man crush on Bill Nighy.

Dylan F.M. over 5 years ago

Z over 6 years ago

Michael Morris over 6 years ago

Nathan T. over 7 years ago

Matt Rhoades over 7 years ago

Nicholas Faiz over 8 years ago
Page Eight is a 2011 film written and directed for the BBC by the British writer David Hare, his first film as director since the 1989 film Strapless. The cast includes Bill Nighy, Rachel Weisz, Michael Gambon, Tom Hughes, Ralph Fiennes, and Judy Davis. The film had its world premiere on 18 June 2011 at the Edinburgh International Film Festival. It was broadcast on BBC Two and BBC HD on 28 August 2011 in the United Kingdom, and on PBS in the United States on 6 November 2011. Johnny Worricker (Bill Nighy) is a long-serving MI5 officer whose closest friend is also his boss, the Director General of MI5, Benedict Baron (Michael Gambon). Baron dies of a heart attack at his country home where he lives with his wife (Johnny's ex-wife) and step daughter (Johnny's daughter). Baron's death comes shortly after distributing a highly explosive report to two MI5 officers (Worricker and Jill Tankard—Judy Davis) and then sharing it with the Home Secretary. At the meeting with the Home Secretary ...
Read more on