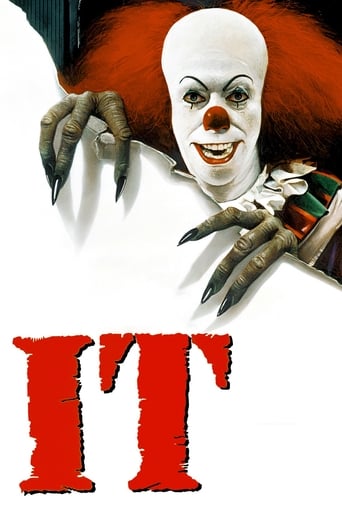 Becky almost 2 years ago
Decent adaptation, very dated, cringe worthy effects. Worth a look for fans of the book.

Eric Brainard 2 years ago
A decent made for tv mellow version of King's amazing novel. Though I prefer the new It.

Austin over 5 years ago
Tim Curry elevates this to a new level, but King's tone isn't frightening.

Kelly Tyrion Robson 6 years ago
I found this funny rather than scary.

Abriel Jenshus over 6 years ago
Seen as a small child, it gave me nightmares and irrational fears. Yeah... :( Never again.

JustinMFnTime almost 7 years ago
Great story and film for a made for TV Movie. Classic Must See! They all float down here.

Matthew Bettencourt almost 7 years ago
Scared the hell out of me out as a kid and still does to this day.

Linden 7 years ago
It's fine as a standalone film, but it broke my favourite aspects of the book.

Henke 7 years ago
Stupid fun movie about grownups who are afraid of ballons. Tim Curry is great as Pennywise

Frankie Linus 7 years ago
Nice movie but the book is so much better.

Carrion Fields over 1 year ago

Nine Lives over 1 year ago

Dean over 1 year ago

monika angel over 1 year ago

Michelle Roussell 2 years ago
It (also referred to as Stephen King's It) is a 1990 horror television miniseries based on the novel of the same name. The story revolves around an inter-dimensional predatory life-form that is simply referred to as "It", which has the ability to transform itself into its prey's worst fears allowing it to exploit the fears and phobias of its victims, while also disguising itself when hunting. The main protagonists are "The Losers Club", or "The Seven", a group of social outcasts who discover "It" and vow to destroy him by any means necessary. The series takes place over two different time periods, the first when the Losers first discover "It", and the second when they're called back to defeat "It", who has resurfaced. "It" mostly takes the form of a sadistic, wisecracking clown called "Pennywise the Dancing Clown", which it uses to lure children and kill them. It takes place in the fictional town of Derry, Maine, USA between the two aforementioned timelines; 1960 and 1990. It aired as...
Read more on