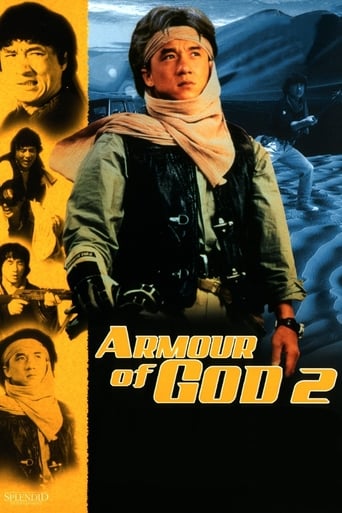 - +
Rate this film
Add a review
Delete Rating/Review Share Add to queue
In your queue
Remove it
Armour of God II: Operation Condor 1991

Davis Keck almost 4 years ago
Aside from some rushed and cliched story beats, this is great. Loved the Indy locales.

Brandon Keck over 4 years ago
Another Chan film that is mostly indistinguishable. But I enjoyed every moment.

Matt Scandalis over 6 years ago
Armour of God II: Operation Condor (Chinese: 飛鷹計劃) is a 1991 Hong Kong martial arts-action film, directed by and starring Jackie Chan. It is the sequel to his hit Armour of God. It was produced by Golden Harvest / Paragon Films. It was filmed primarily in Madrid, Spain, and Morocco. While the opening scenes where Asian Hawk went Powered paragliding was shot in Tagaytay City over Taal Lake, Cavite, Philippines. The scene where he stole the gem from the cave tribe and escaped by zorbing was shot in Mount Macolod in Cuenca, Batangas. This film is even more akin to Indiana Jones than Armour of God, in that it features Chan's character Condor ("Asian Hawk" in the US release) battling against a former Nazi to retrieve gold from an abandoned base deep in the Sahara Desert. In one scene, Jackie escapes his persecutors in a zorb-like sphere. Because this film was released in the US several years before Armour of God, its US title is simply Operation Condor. When the first film was eventually...
Read more on