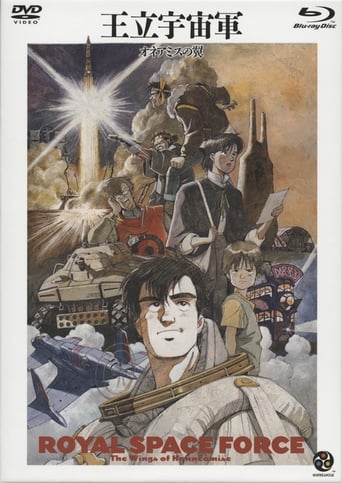 23
13
2
Rate this film
Add a review
Delete Rating/Review Share Add to queue
In your queue
Remove it
Royal Space Force: Wings of Honneamise 1987

Dónal Kennedy 5 years ago
Doesn't look its age, but Gainax's debut feature never manages to emotionally hook you in.

Robby McKilliam over 8 years ago
Slow to start, but the final scene jaw dropping.

Annalisa Schettino over 3 years ago

Victoria Goulborn over 8 years ago

Robert McLarty over 8 years ago

Anthony Krumm over 8 years ago

Chuck Handshy over 8 years ago

Vin Breau over 8 years ago

Chris Saldivar over 8 years ago

Andrew Ewan almost 9 years ago
Royal Space Force: The Wings of Honnêamise (王立宇宙軍 オネアミスの翼, Ōritsu Uchūgun: Oneamisu no Tsubasa) is a 1987 Japanese animated science fiction film and the first film produced by Gainax and Bandai Visual. It was directed and written by Hiroyuki Yamaga with assistant director Takami Akai. The film would eventually be a critically acclaimed Gainax classic, but it was poorly received and sold only modestly domestically and overseas. A sequel was intended to be released set 50 years later, but due to lack of funds, Gainax abandoned it part way through production; Toshio Okada cited a fundamental dissatisfaction with the script and plot. The story is set in a parallel version of Earth, where an industrial civilization is flourishing amidst the backdrop of an impending war between two bordering nations, the kingdom of Honneamise and the "Republic". Shirotsugh Lhadatt is an unmotivated young man who has drifted into his nation's lackadaisical space program. After the death of a fellow astronaut...
Read more on