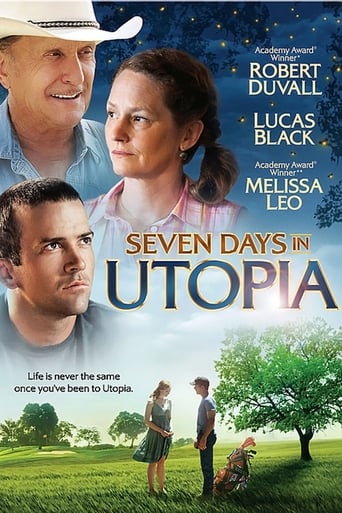 null null over 7 years ago

Agus Echagüe over 8 years ago
Seven Days in Utopia is the inspirational drama sport film directed by Matt Russell, starring Robert Duvall, Lucas Black, and Melissa Leo. The film is based on the 2009 book Golf's Sacred Journey: Seven Days at the Links of Utopia by Dr. David Lamar Cook, a psychologist who received a Ph.D. in Sport and Performance Psychology from the University of Virginia. It was filmed in Utopia, Texas and Fredericksburg, Texas and was released on September 2, 2011 in the United States. The film received poor reviews from film critics. Salon noted that the "bland Christian film squanders Oscar-winning cast" and questioned "why did these talented performers agree to appear in this piece of hokum?" The Guardian described the film as "headed for the long grass."The New York Times described it as "a stultifying hybrid of athletic instruction film and Christian sermon", while Golf.com questioned whether it was "the worst golf film ever made?"
Read more on