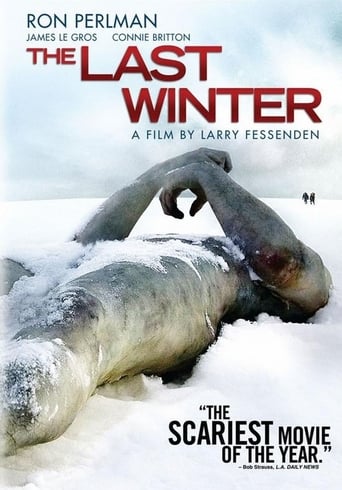 Henke almost 7 years ago
the thing-rippoff

Marco almost 7 years ago
... started boring so I turned off.

Ronan Conway 7 years ago
The Last Winter is a 2006 thriller film, directed by Larry Fessenden. The Last Winter premiered in The Contemporary World Cinema Programme at the 2006 Toronto International Film Festival on September 11, 2006. The script for the film originally featured a more woodsy Alaska with pine trees and it was after a research trip to Prudhoe Bay that they discovered the harsh flat conditions that ultimately ended up in the film. The American oil company KIK Corporation is building an ice road to explore the remote northern Arctic National Wildlife Refuge seeking energy independence. Independent environmentalists work together in a drilling base headed by the tough Ed Pollack in a sort of agreement with the government, approving procedures and sending reports of the operation. When one team member is found dead and naked on the snow, the environmentalist James Hoffman suspects that sour gas (natural gas containing hydrogen sulfide) may have been leaked out as a result of runaway climate change ...
Read more on