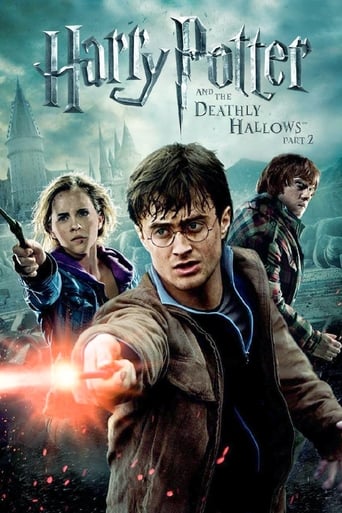 - +
Rate this film
Add a review
Delete Rating/Review Share Add to queue
In your queue
Remove it
Harry Potter and the Deathly Hallows: Part 2 2011

Larimar Benítez over 2 years ago
love

Aaron Jones 3 years ago
Must have been a short script.

Amanda Mathews over 3 years ago
Great conclusion to an amazing series.

Kaell Steers 4 years ago
Honestly a very disappointing end to an amazing saga.

Freddie Kay over 4 years ago
"The conclusion to it all."

Katy Eller over 4 years ago
Very fast paced and a satisfying end to the series.

RylieFales almost 5 years ago
Really dramatic! A must watch for all fantasy lovers, and anyone else ;P

Michael Cole almost 5 years ago
Somehow manages to feel drawn out and rushed at the same time.

neelima over 5 years ago
I loved it.

Anastasia Loule over 5 years ago
Loved the scene about Snape's love for Lily!

antoshka over 5 years ago
The part of about Snape and Dumbledore is a peak!

Laura Vastenavont almost 6 years ago
its a very dark movie, but i liked it

Ashley Beacom 6 years ago
A little out of sync with the book but excellent nonetheless!

Kosala Liyanage 6 years ago
Well, it's never going to be as good as the book.

Annika Løchte Taylor over 6 years ago
Liked it, but I was disappointed with the way it changed the original scenes from the book

Dominique Bosman over 6 years ago
I've seen this one so many times and I'm still pissing my pants because this is sooo good!

Luna Lovegood almost 7 years ago
what are you fucking doing to my heart and why is everything so cheesy
Harry Potter and the Deathly Hallows – Part 2 is a 2011 epic fantasy film directed by David Yates and the second of two films based on the novel of the same name by J. K. Rowling. It is the eighth and final instalment in the Harry Potter film series, written by Steve Kloves and produced by David Heyman, David Barron, and Rowling. The story continues to follow Harry Potter's quest to find and destroy Lord Voldemort's Horcruxes. The film stars Daniel Radcliffe as Harry Potter, alongside Rupert Grint and Emma Watson as Harry's best friends, Ron Weasley and Hermione Granger, respectively. Principal photography began on 19 February 2009, and was completed on 12 June 2010, with the final day of reshoots taking place on 21 December 2010, marking the series' closure of ten years of filming. Part 2 was released in 2D, 3D and IMAX cinemas worldwide from 13–15 July 2011, and is the only Harry Potter film to be released entirely in 3D. The film opened to universal critical acclaim, and is among...
Read more on