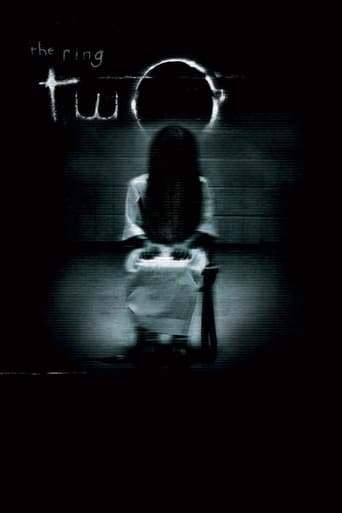 Natalie 7 months ago
I don't recommend it, unless you've watched the first and have to know what happens next.

Michael Cole over 2 years ago
Slower and more boring than the first; definitely didn't need to be over 2 hours long.

Jody Bradley over 6 years ago
Love!!!!

Kayley Sage over 2 years ago

Steven Jv over 3 years ago

vics over 3 years ago

Alice Albescu 4 years ago
The Ring Two is a 2005 American psychological horror film, and a sequel to the 2002 film The Ring, which was a remake of the 1998 Japanese film Ring. Hideo Nakata, director of the original Japanese films Ring and Ring 2 on which the American versions are based, is the director of this film in place of Gore Verbinski. This sequel (and the upcoming 2012 3D sequel The Ring 3D) is not based on any of the previous Japanese sequels to Ring, and is an original storyline, continuing from The Ring. The movie was filmed in Astoria, Oregon and Los Angeles, California. It was released on March 18, 2005, and opened with a strong US$35 million its first weekend, more than doubling the opening weekend of The Ring. Its final $75 million gross was far less than the original's $129 million total. Approximately six months after the events of the first movie, Rachel Keller (Naomi Watts) and her son Aidan (David Dorfman) have moved from Seattle to the quiet coastal community of Astoria, Oregon. Rachel...
Read more on