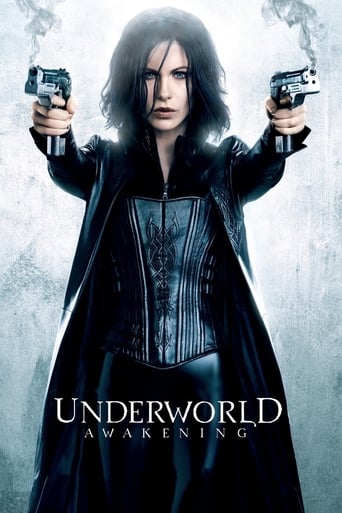 - +
Rate this film
Add a review
Delete Rating/Review Share Add to queue
In your queue
Remove it
Underworld: Awakening 2012

Michael Cole over 2 years ago
Yep, that outfit is still ridiculous

Obi Xan Statham over 5 years ago
I am ashamed to have been attracted to her leather clad ass. Terrible movie. Bad acting.

Salena G almost 7 years ago
My least favorite of the series, still decent. I love the series too much not to like it.

LANX over 1 year ago

Jonathan Casey Spencer over 2 years ago

Facundo E. Cornellana over 2 years ago

tal sheldon over 2 years ago

Güner Durmaz over 2 years ago

Lucas Ayala over 2 years ago
Underworld: Awakening (also known as Underworld 4) is an upcoming American 3D action-horror film set to be released on January 20, 2012. Underworld: Awakening is the second sequel in the Underworld series (with Rise of the Lycans being the prequel to the first film Underworld and Evolution being the first sequel). Måns Mårlind and Björn Stein are directing the film with a screenplay by Len Wiseman, John Hlavin, and Allison Burnett. Tom Rosenberg, Gary Lucchesi, Len Wiseman, and Richard Wright are producing the film with David Kern, David Coatsworth, Henry Winterstern, and Skip Williamson serving as executive producers. Kate Beckinsale will reprise her role as Selene from Underworld and Underworld: Evolution, while Sandrine Holt, Michael Ealy, and India Eisley have been cast in roles new to the series. Filming began in March 2011 in Vancouver, British Columbia. It will be released In Real D Cinemas and in IMAX 3D and also playing in 2D theatres on January 20th 2012. On April 4, 2011,...
Read more on