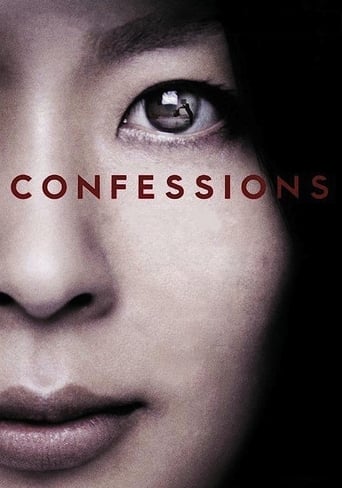 Afua over 7 years ago
Absolutely great film filled with karma and revenge, definitely worth the watch.

Zach Sly over 7 years ago
Confessions is an incredible story of revenge, killers, and worst of all...school kids.

Mada Soare over 8 years ago
The movie creates a disturbing view on motherhood.

Raffaela Px Scarano over 2 years ago

Káťa Vítová over 3 years ago

Lowfill Tarmak over 4 years ago

Davide MrBlonde over 4 years ago

Lea Suć over 6 years ago

Henke over 7 years ago

Matteo Satta over 7 years ago

Abhijeet Das over 7 years ago

Eun Ji Jeon over 7 years ago

Bjoern Eichstaedt 8 years ago
Confessions is a 2010 Japanese film directed and written by Tetsuya Nakashima. "Tetsuya Nakashima’s Confessions is one of Japan’s most important films of the year. Reigning the national box office for weeks, the film has seduced, frightened, provoked and moved audiences with the depth of its focus on the delinquency of a despairing youth. A stylized mixture of cruelty and compassion, Confessions deals with school violence, bullying, revenge and love, while also addressing the miserable state of Japanese public schools, prejudices against HIV victims and the consequences of allowing teenage violence to go unpunished. A monologue is delivered over the usual chaos of a seventh grade classroom on a spring morning. The voice belongs to a teacher who stands powerless in front of her class, an undisciplined tangle of thirteen-year-olds playing with their mobile phones, shouting, moving around and simply not paying attention. But the teacher’s voice and her chilling address gradually become...
Read more on