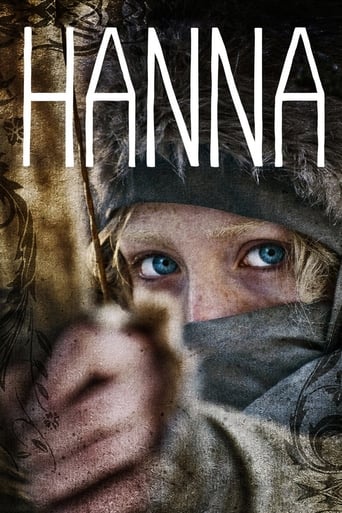 Michael Cole over 2 years ago
That's a badass kid

Johnny Nys over 6 years ago
Nope

Lizzie over 6 years ago
The soundtrack…perfect.

Gavin Klein almost 7 years ago
Such a bad ass movie

Jody Bradley 7 years ago
It's an okay film.

Josh Steadman 7 years ago
I wanted to like this, but just can't. It may be worth another try, but has some issues.

Grant davies over 7 years ago
ok

Tavis over 7 years ago
Sharp and smart and fun and intense. Also: music.

Katie Crane over 7 years ago
I found this movie well balanced, the music fits very well, and the acting is good too.

Michael Robinson 8 years ago
A film that shouldn't of worked, but does so effortlessly. Engaging story & action.

Heath S 8 years ago
Wonderful film, loved the story and the cast will be watching again soon.

Bobbie Franklin over 8 years ago
Aesthetically invigorating. Loose plot and shallow character development. Worth the watch!

Kyle McConaghy over 8 years ago
Under-appreciated. As good as any Bourne film.
Hanna is a 2011 European-American action thriller film directed by Joe Wright. The film stars actress Saoirse Ronan as the title character with Eric Bana and Cate Blanchett. The film was released in North America on April 8, 2011 and in Europe on May 5, 2011. Hanna Heller (Saoirse Ronan) is a 16-year-old girl who lives with her father, Erik Heller (Eric Bana) in the wilderness of Finland. Ever since she was two years old, Hanna has been trained by Erik to become a multilingual assassin. As part of her training, she has never come into contact with modern technology and has memorized a series of fake back stories for herself to be used "when the time comes". One night, Hanna tells Erik that she is "ready", and he gives her a box containing an old transmitter that will alert the outside world to their presence. After analyzing the situation, Hanna flips the switch, sending a signal of her location to Marissa Wiegler (Cate Blanchett), a CIA officer. Marissa sends a team to Erik's cabin,...
Read more on