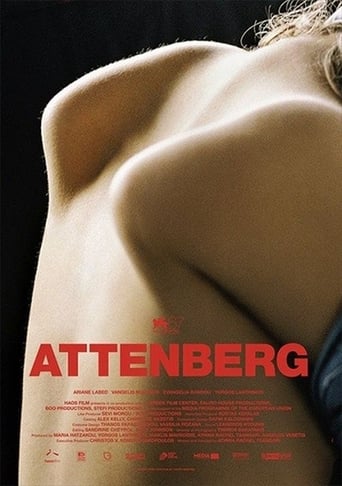 Henry Cropper 7 years ago
film meanders...somewhat of a long hike...but no regrets taking the trip.

Pony Hünchen over 5 years ago

Aaron Read over 7 years ago

Larisa Balta over 7 years ago
Attenberg is a Greek drama film directed by Athina Rachel Tsangari. The film was nominated for the Golden Lion at the 67th Venice International Film Festival and Ariane Labed won the Coppa Volpi for the Best Actress. It was filmed in the Aspra Spitia village of Boeotia. The film has been selected as the Greek entry for the Best Foreign Language Film at the 84th Academy Awards. Quentin Tarantino, who was head of the Jury for the 67th Venice International Film Festival, said that the film "grew on us the most, and showed another Greece". Journalist Shane Danielsen called the film "an intellectually rigorous, quietly wrenching Greek drama". Peter Bradshaw characterised the film as "an angular, complex, absorbing and obscurely troubling movie". A promotion picture for the film where the tongues of two women meet was censored on Facebook.
Read more on