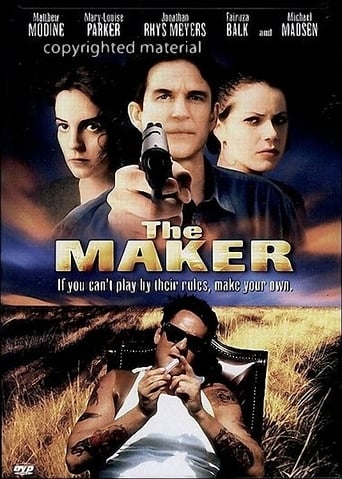 Matthew Modine, Mary-Louise Parker, Jonathan Rhys Meyers, Fairuza Balk, Michael Madsen
Rate this film now
Write a short review
The Maker is a 1997 American drama film written by Rand Ravich and directed by Tim Hunter. The Maker was released on October 17, 1997 in the United States of America and is rated R for strong violence, drug use, language and some sexuality. Josh (Jonathan Rhys Meyers) is a high school guy who lives with adoptive parents and is involved in little crimes with his friends, including young lesbian Bella (Fairuza Balk). Suddenly his elder brother Walter (Matthew Modine) comes out of the blue after leaving home 10 years ago when he was 18 and not being heard of all those years. Walter starts to involve Josh in various new criminal activities, including robbery. The Maker (film) at the Internet Movie Database
Read more on