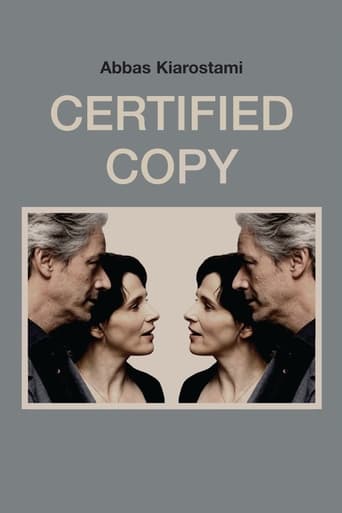 Aaron Jones 2 years ago
Cross of 'F for Fake' and 'Contempt.' Satisfying and dissatisfying. A pleasure to watch.

Michael Cole over 5 years ago
I was enjoying their conversations until the transitional twist half-way through.

Renard Bansale over 7 years ago
Mind-bending in its simplicity and its two-faced storyline. Truly an art-house gem.

J.C. almost 8 years ago
A tense and captivating study on — among other things — the affective power of fiction.

Arijit Shaw over 2 years ago

Matteo Satta over 2 years ago

Lucy Avramova over 5 years ago

Zan over 6 years ago

Diana Vaz over 6 years ago

Bis Lf 7 years ago
Certified Copy (French: Copie conforme) is a 2010 film by Iranian writer and director Abbas Kiarostami, starring Juliette Binoche and the British opera singer William Shimell, in his first film role. The film is set in Tuscany, and focuses on a British writer and a French antiques dealer, whose relationship undergoes an odd transformation over the course of a day. The film was a French-majority production, with co-producers in Italy and Belgium. The dialogue is in French, English and Italian. The film premiered at the 2010 Cannes Film Festival, where Binoche won the Best Actress Award for her performance. Critics have been mostly positive and have compared the film to several others, notably Roberto Rosselini's 1954 film Journey to Italy. British writer James Miller (Shimell) is in Tuscany to give a talk about his new book, titled "Certified Copy", which argues that, in art, issues of authenticity are irrelevant, because every reproduction is itself an original and even the original...
Read more on