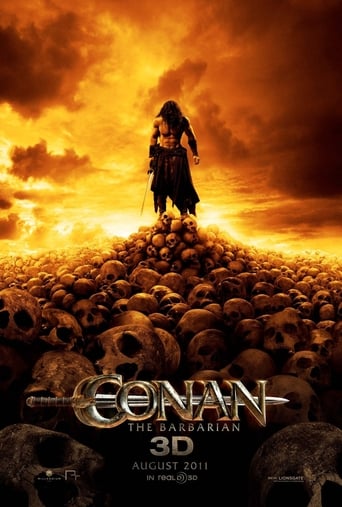 Rosalio Galvan almost 5 years ago
conan talks too much

Michael Cole over 6 years ago
Poor story, but seriously, who watches Conan for the story

Linden over 6 years ago
Terrible and fun in the tradition of Conan!

Daniel Jones over 6 years ago
Hack n' slash movie with little in common with the superior original. Still worth a watch.

Josh Steadman almost 7 years ago
Couldn't even get halfway into it. Don't waste your time. At least the original was funny.

Grant davies almost 7 years ago
it's not as good as Arnie's but I liked it. 7/10

Jimmy Nilsson over 7 years ago
Hilariously awful most of the time. A badguy with a squid on his head? Seriously?

Brendan Keevers over 7 years ago
Slow, painful and if there wasn't the token nudity in some parts... nup, still sucked.

Jason Smith almost 8 years ago
An insult to the original, and anyone stupid enough to watch it

James Partridge 8 years ago
I watched this because of the fight scenes. Then I feel asleep in the final battle.

Felícia Silva over 2 years ago
Conan the Barbarian is a 2011 sword and sorcery fantasy film based on the character Conan the Barbarian created by Robert E. Howard. The film is a new interpretation of the Conan mythology, and is not related to the films featuring Arnold Schwarzenegger. It stars Jason Momoa in the titular role, alongside Rachel Nichols, Rose McGowan, Stephen Lang, Ron Perlman, and Bob Sapp with Marcus Nispel directing. The film had spent seven years in development at Warner Bros. before the rights were shifted to Nu Image/Millennium Films in 2007, with a clause wishing for immediate start on production. Lionsgate and Sony Pictures entered negotiations for distribution, with the film seeing many directors, prominently Brett Ratner, before settling on Nispel in 2009 and subsequently bringing together a cast and crew. Filming began on March 15, 2010 and concluded on June 5, 2010. The film was first released on August 17, 2011 in four countries: France, Belgium, Iceland and the Philippines. For later...
Read more on