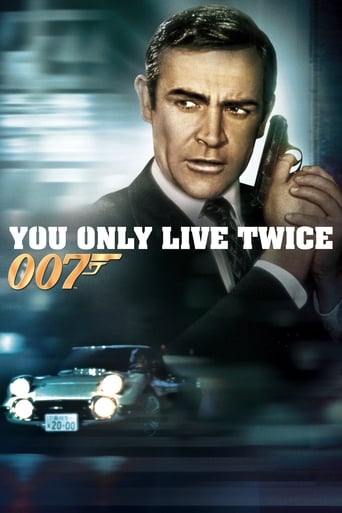 Dónal Kennedy almost 3 years ago
Gets right everything Thunderball got so wrong. Shame about the 60s casual racism, though.

Daniel Jones over 3 years ago
James Bond goes to Japan, and it is good. Connery, ninjas, SPECTRE, space piracy.It's here

Taylor Reginald Wright over 7 years ago
A great Bond adventure with cool characters some incredible special effects for its time.

Kenneth Chisholm over 7 years ago
Although its story logic is flawed, the story is still great Bond with swashbuckling fun.

Dylan Clites almost 8 years ago
Other than Bond disguising himself as an Asian fisherman, this is classic Bond at his best

Janika Puolitaival over 1 year ago

Norppa over 2 years ago

Annalisa Schettino 3 years ago
You Only Live Twice (1967) is the fifth spy film in the James Bond series, and the fifth to star Sean Connery as the fictional MI6 agent James Bond. The film's screenplay was written by Roald Dahl, and loosely based on Ian Fleming's 1964 novel of the same name. It is the first James Bond film to discard most of Fleming's plot, using only a few characters and locations from the book as the background for an entirely new story. In the film, Bond is dispatched to Japan after American and Soviet manned spacecraft disappear mysteriously in orbit. With each nation blaming the other amidst the Cold War, Bond travels secretly to a remote Japanese island in order to find the perpetrators and comes face to face with Ernst Stavro Blofeld, the head of SPECTRE. The film reveals the appearance of Blofeld who was previously a partially unseen character. SPECTRE is both working on behalf of and extorting the government of an unnamed Asian power, implied to be Red China, in order to provoke war...
Read more on