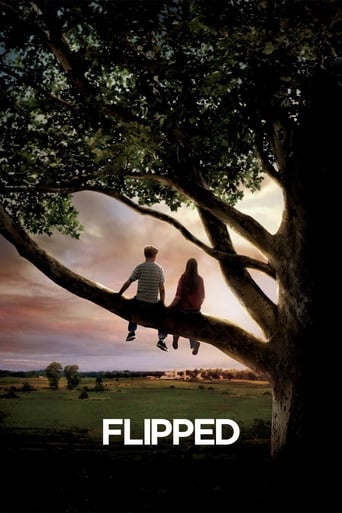 Yalini over 2 years ago
so cuteeeeeee

Rachelina Larasati over 3 years ago
I loved it that the actors recite the exact words from the book. Lovely movie

N B over 2 years ago

Elisabeth over 2 years ago

mariia over 3 years ago

nope over 3 years ago

Nayesth Fuentes over 3 years ago

Kara Ru over 3 years ago

Ghaida P. Setiana over 3 years ago

Gavin Lewis over 3 years ago

noemi gutierrez over 3 years ago
Flipped is a 2010 romantic comedy drama film directed by Rob Reiner. It is an adaptation of the novel Flipped by Wendelin Van Draanen. It had a limited release in the US on August 6, 2010. The film had a wide release on August 27, 2010. Callan McAuliffe plays Bryce and Madeline Carroll plays Julianna. Aidan Quinn and Penelope Ann Miller occupy the roles of Julianna's parents, and Kevin Weisman plays the role of Julianna's mentally disabled uncle, while Shane Harper and Michael Bolten play her two brothers. Anthony Edwards and Rebecca De Mornay play Bryce's parents, and John Mahoney took on the role of his grandfather. In 1957, when second-graders Bryce Loski (Callan McAuliffe) and Julianna "Juli" Baker (Madeline Carroll) first meet, Juli knows it's love. But Bryce isn't so sure. Girl-phobic and easily embarrassed, young Bryce does everything he can to keep his outspoken wanna-be girlfriend at arm's length for the next six years, which isn't easy since they go to the same school and...
Read more on