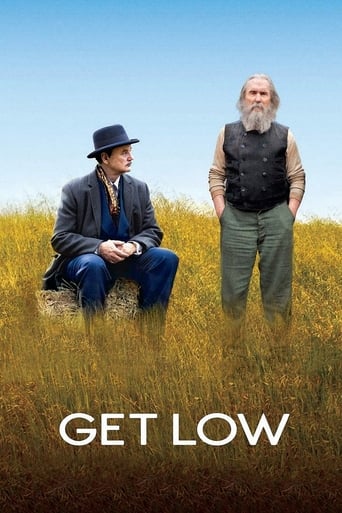 Michael Cole 5 years ago
Good story, but not terribly original.

Rachel Finston over 5 years ago
Beautifully made, but not as moving as you would expect.

Eric Ratzlaff over 1 year ago

Simon Taylor over 5 years ago

Ashleigh Louise Klaassen over 6 years ago

John Wiens over 7 years ago

EJ Strauss over 7 years ago

Patrick Gaertner over 7 years ago

Devon over 7 years ago

Sarah Wayne over 8 years ago

Liz Neu over 8 years ago
Get Low is a 2009 drama film directed by Aaron Schneider, written by Chris Provenzano and C. Gaby Mitchell, and starring Robert Duvall, Bill Murray, Sissy Spacek, Lucas Black, Gerald McRaney, Bill Cobbs, Lori Beth Edgeman, Andrea Powell, Rebecca Grant, Scott Cooper, and Chandler Riggs. The motion picture was filmed entirely on location in Georgia, and support for the production was provided by the Georgia Department of Economic Development. The film premiered at the Toronto International Film Festival and is distributed by Sony Pictures Classics. For his performance, Robert Duvall was awarded the Hollywood Award for Best Actor in October 2010. The film was released on July 30, 2010, in the United States. It received positive reviews from critics. No one really understands Felix Bush (Robert Duvall), who lives as a hermit deep in the woods. Rumors surround him, like how he might have killed in cold blood, and that he's in league with the devil. So the town is surprised when Felix shows...
Read more on